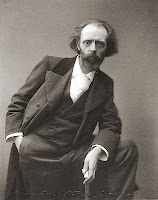 From absinthe to laudanum, substance abuse was prevalent during the latter part of the Victorian era. It doesn't seem like you could be a writer in the 1890s, without dying of substance abuse or knowing someone who had. This story bookends the decade, as a reminiscence of an author, who died in 1889, from a book published in 1908.

The book: My Story, Hall Caine's autobiography. Caine (photo on left 1895) was a Manx writer, very popular in the 1890s and 1900s. During the 1890s, he was surely bumping shoulders with my favorite writers. I'm not so fond of his writing as I am of his life and interactions with others of the period.

The passage I've selected is about Wilkie Collins. I just love how in his narrative, Caine portrays himself as using Collins's first and last name every time he addresses him, though they seem to have been great friends. Collins was a prolific writer and published 30 novels, more than 60 short stories, 14 plays, and more than 100 nonfiction essays. 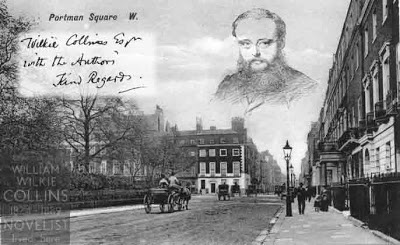 In this passage, Caine is astonished at Collins's use of laudanum. Laudanum was a wildly popular drug during the Victorian era. It was an opium-based painkiller prescribed for everything from headaches to tuberculosis.

One day, towards the beginning of 1888, I called upon him in great excitement about a difference I had just had with a friend with whom I was trying to collaborate. I wished him to adjudicate in the dispute, and he cordially undertook to do so.

"State the difficulty," he said ; and I stated it with much fulness. He stopped me again and again — repeated, questioned, and commented. Two hours went by like ten minutes. We were sitting in Wilkie's workshop, With proofs of his current work everywhere about us. The point was a knotty one, and a serious issue seemed involved in it. Wilkie was much worried.

"My brain is not very clear," he said once or twice, taking a turn across the room. Presently, and as if by a sudden impulse, he opened a cabinet, and took out a wine-glass and what seemed to be a bottle of medicine. " I'm going to show you one of the secrets of my prison- house," he said with a smile, and then he poured from the bottle a full wine-glass of a liquid resembling port wine. "Do you see that?" he asked. " It's laudanum." And straightway he drank it off.

“Good heavens, Wilkie Collins!" I said, "how long have you taken that drug ? "

"Oh yes, much more. Don't be alarmed. Remember that De Quincey used to drink laudanum out of a jug." Then he told me a story, too long to repeat, of how a man-servant of his had killed himself by taking less than half of one of his doses.

"To stimulate the brain and steady the nerves."

"And you think it does that?"

"Undoubtedly," and laughing a little at my consternation, he turned back to the difficult subject I had come to discuss. " I'll see it clearer now. Let us begin again," he said.

"Wait," I said. "You say, my dear Wilkie, that the habit of taking laudanum stimulates your brain and steadies your nerves. Has it the same effect on other people ?"

"It had on Bulwer Lytton," answered Collins. "He told me so himself."

"Well, then, Wilkie Collins," I said, "you know how much I suffer from nervous exhaustion. Do you advise me to use this drug?"

He paused, changed colour slightly, and then said quietly, "No."

The last time I saw Collins he was in great spirits and full of the "Reminiscences" that he intended to write. He talked of all his old friends with animation, the friends of his youth, "all gone, the old familiar faces"; and there was less than usual of the dull undertone of sadness that had so often before conveyed the idea of a man who felt that he had strutted too long on his little stage. He enjoyed his wine and some old brandy that came after it and a couple of delicious little cigars of a new brand which he loudly recommended. The more serious questions of literature and morality were all banished, and yarn followed yarn.

I can only remember a single sad note in his conversation, and it was ominous. He was talking of Dickens, and I think he said he had been engaged to visit at Gad's Hill on the very day that Dickens died.

A few days later, Wilkie Collins wrote inviting me to lunch, but naming no particular day. I was to go what day I liked, only remembering to send a telegram two or three hours in advance. So one Sunday morning I wrote a letter telling him that I meant to visit him the following day, and asking him for a telegram to say if the time would do. Instead of Wilkie's telegram there came a message from his affectionate adopted daughter, saying that on the previous morning he had been struck down with paralysis.