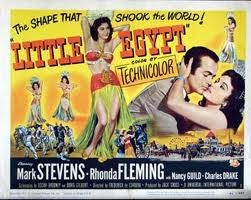 I am a distractible writer. I go on tangents while writing and carrying out my research, but I also get drawn back into my research and writing, while engaging in every other aspect of my life. Looking through Facebook today, I came across an article from last March, called: "Why I can't stand white belly dancers." Of course, I thought about the question of how white belly dancers could be engaging in cultural appropriation, but what stuck in my head was a little comment Randa Jarrar put in parentheses in the second paragraph.


As early as the 1890s in the U.S., white “side-show sheikhs” managed dance troupes of white women, who performed belly dance at world’s fairs (fun trivia: Mark Twain made a short film of a belly dancer at the 1893 fair).

"Mark Twain made a belly dancing movie!" I thought. I had to check this out. Eventually, I found a book called: Looking for Little Egypt.


The World's Columbian Exposition, commemorating the four-hundredth anniversary of Columbus' arrival in the New World, was the frist international exposition to feature a separate area for amusements.

Basically, the setting is a celebration of colonizing the Americas.


Along this strip, known as the Midway Plaisance, "dancing girls" in colorful native costumes of the Middle East performed regularly for the curious crowds who poured in. "Little Egypt," according to many different reference and history books, is supposed to have been a popular performer on the Midway Plaisance. In fact, according to some accounts, she was a dance star who caused a sensation and saved the financially-troubled exposition from ruin by drawing people from all over the country to her exotic performances. She is said to have shocked and scandalized audiences in Chicago, and popularized the newly-invented zipper by using it to help her wriggle out of costumes. she supposedly caused Mark Twain to suffer a coronary and starred in one of the first motion pictures, filmed at the fairgrounds by Mark Twain himself.

So, who was Little Egypt? The author of Looking for Little Egypt thinks she was mostly a legend.


I looked through months of various newspapers on microfiml and through numerous sourvenir volumes for a mention of Little Egypt at the 1893 fair. Although I found many other personalities of the Midway Plaisance described, I could not locate a contemporary reference to the infamous dancer there. This led me to the conclusion that even if Little Egypt was actually there, she was not famous at this point in her career and certainly not the star performer on the Midway Plaisance. In fact, the name "Little Egypt" probably did not become notorious until a few years after the fair. If this is true, how did the Little Egypt legends originate? And what made them so popular?

It turns out that Little Egypt was a little like the Dread Pirate Roberts; Little Egypt was the stage name used interchangeably between three popular belly dancers, and many imitators. Basically, the symbol was important - not the actual dancer.

The popular dancers, who used the name, Little Egypt, were:

(1) Fahreda Mazar Spyropoulos (1871-1937), who was born in Syria, and also used the stage name Fatima, the name she used  at the "Street in Cairo" exhibition on the Midway at the World's Columbian Exposition, held in Chicago in 1893. She's the one who supposedly caused Twain's near fatal heart attack (he really fetishized belly dancing).

I don't know much about these women, but like the Dread Pirate Roberts, they weren't using a name interchangeably to develop the reputation of a respectable citizen; they were using Little Egypt as a notorious and exotic sex symbol. And BANG! I started to understand Jarrar's points about cultural appropriation a little better.


When I have argued, online and in person, with white women belly dancers, they have assured me that they learned to dance from Arab women and brown women. This is supposed to make the transaction OK. Instead, I point out that all this means is that it is perfectly all right with these teachers that their financial well-being is based on self-exploitation. As a follow-up, white belly dancers then focus on the sisterly and community aspect of belly dance. They claim that the true exploiter of belly dancing is Hollywood, and the Egyptian film industry, which helped take belly dancing out of women’s homes and placed it directly under the male gaze. Here, the argument white belly dancers try to make ignores the long history of white women’s appropriation of Eastern dancing and becomes that this, the learning and performance of belly dance, is not about race and appropriation, but about gender and resisting the patriarchy and how all of us belly dancing together is a giant middle finger to men and their male gaze-y ways.

Cultural appropriation is not an act that is exclusive to white women in this case. It's the removal and perversion of a dance from its original culture into a culture that fetishizes and objectifies the concept (not the reality) of an Arab woman.