Much is made of Oscar Wilde's affairs of the heart, but his wife also had a bit of a crush. This was by no means an extramarital affair, and was nothing compared to the way that Oscar carried on, but was more akin to the way a married woman today might feel about Brad Pitt. Constance had a celebrity crush, and his name was Pablo de Sarasate.

Sarasate's portrait by Whistler was one of the last pieces of Constance's estate to be sold off during Oscar's lifetime. It was painted in 1884, a few years before he would be named "Man of the Day" by Vanity Fair, and Constance would start attending all of the functions at which he might be present - usually with her equally obsessed friend, the writer, Marie Corelli. 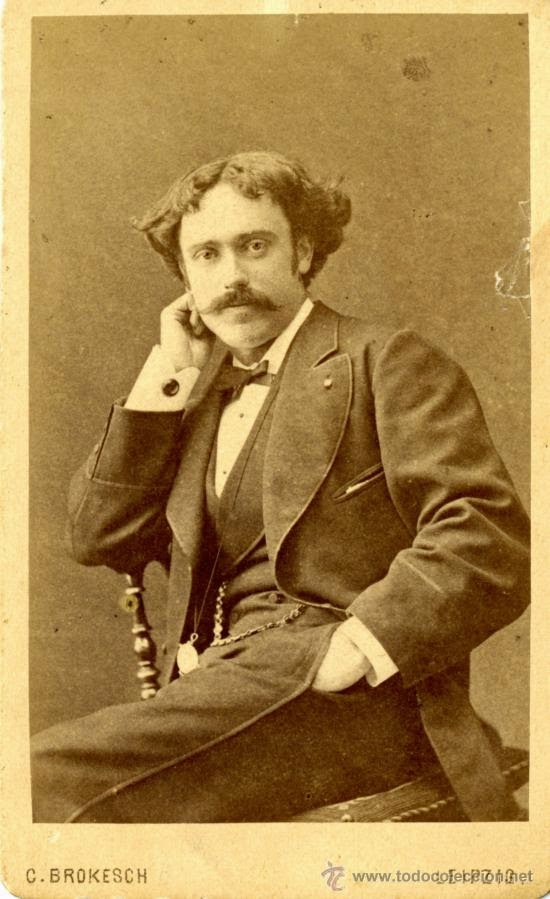 At age five, Sarasate began studying the violin with his father in his birthplace, Pamplona, Navarre. Able to demonstrate a natural talent at a young age, he gave his first public concert at age eight, where he attracted his first patron,  who paid for him to study under Manuel Rodríguez Saez in Madrid, where he gained the favor of Queen Isabella II.

With many prizes already under his belt, Sarasate first performed in London as a teenager in 1861. Constance was still a baby, and Sarasate's best-known compositions wouldn't come until much later: Zigeunerweisen (1878), and the Carmen Fantasy (1883).

Suffering from chronic bronchitis, Sarasate died in France in 1908. Bequeathed to the Musée de la Musique, his violin, made by Antonio Stradivari in 1724,  now bears his name as the Sarasate Stradivarius. The Real Conservatorio Superior de Música, Madrid, own his second Stradivari, the Boissier, made in 1713.

I just wonder if Constance ever wished Oscar had a mustache like Sarasate's.