Halloween is for Lovers

The old guidwife's well-hoarded nuts,
Are round and round divided,
And many lads' and lasses' fates
Are there that night decided:
Some kindle cosily, side by side,
And burn together trimly;
Some start away, with saucy pride,
And jumpout over the chimney
Full high that night.

Robert Burn's poem "Halloween" (1786) was still a favourite in Victorian England, where in the last days of October and the first days of November, the would write their name on nuts, as well as the name of their intended, which would be placed in a fire to see how their relationship would turn out.

The first nineteenth-century mention of Halloween  appears in Godey' s 'Lady's Book' (October 1872), which relies on Burns' poem for a description of the event.

Amongst the American people but little other sport is indulged in than the drinking by the country folk, of hard cider, and the masticating of indigestible "crullers," or "doughnuts." The gamlins make use of the festival to batter down panels, dislocate bell-wires, unhinge gates, destroy cabbage patches, and raise a row generally.

The destructive rituals offended Victorian sensibilities, but the romantic rituals captured the imagination. And the intense spiritualism of the era made room for the introduction of new "ancient" rituals, like the Ouija Board. 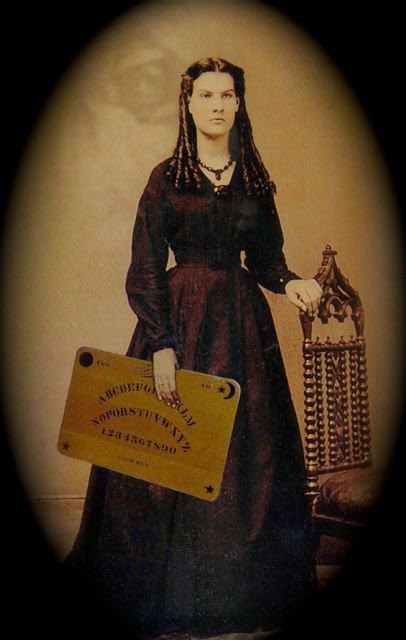 This is the last of my October 2014 Halloween posts. Happy Halloween! Have a great weekend, and play safe!

If you have enjoyed the work that I do, please consider supporting my Victorian Dictionary Project!
Posted by Tine Hreno at 1:15 PM