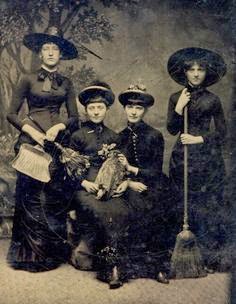 Sir Arthur Conan Doyle protested the harassment of mediums by comparing it to the antiquated persecution of witches. In 1897, Sigmund Freud said he understood "the stern therapy of the witches’ judges," as he learned more about cults, particularly sex cults. 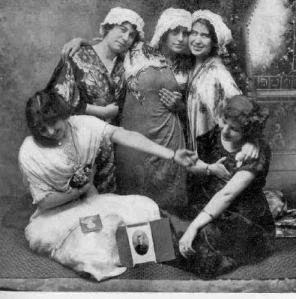 Unlike one writer, I think it's safe to say that, although he believed in ghosts and fairies, Conan Doyle didn't believe in, condone, or support witches. However, Joe Revill does identify an interesting current of 1890s writing on the subject of witches.

Woman as Witch: Evidences of Mother-Right in the Customs of Mediaeval Witchcraft. A lecture given to the Somerville Club by Karl Pearson, 1891 outlines Pearsons belief that witchcraft was actual magic, and that "the confessions wrung from poor old women in the torture chambers of the Middle Ages have a real scientific value for the historian of a much earlier social life." Pearson was a professor of Applied Mathematics at the University College London, and would carry on theorizing, lecturing, and writing about witches throughout the 1890s.

In Woman as Witch, Pearson makes the connection between the history of witchcraft's relevance to contemporary interests in the status of women. Don't start calling him a suffragette just yet. His view of men and women throughout history was very specific, and served to reinforce Victorian ideas about gender.


The woman as depositary of family custom and tribal lore, the wise-woman, the sibyl, the witch, would hand down to her daughters the knowledge of the religious observances, of the power of herbs, the mother-lore in the mother tongue, possibly also in some form of symbol or rune such as a priestly caste love to enshroud their mysteries in. The symbols of these goddesses would be the symbols of woman’s work and woman’s civilisation, the distaff, the pitchfork, and the broom, not the spear, the axe, and the hammer. Since agriculture in its elements is essentially due to women, hunting and the chase characteristic of men, the emblems of early agriculture would also be closely associated with the primitive goddess. - Karl Pearson

Pearson definitely believed that Joan of Arc was a witch. However, he did not condone the use of witchcraft, or goddess worship, among his contemporaries, considering it primitive and savage. He painted this image of the witch:


We have accordingly to look upon the witch as essentially the degraded form of the old priestess, cunning in the knowledge of herbs and medicine, jealous of the rights of the goddess she serves, and preserving in spells and incantations such wisdom as early civilisation possessed.

Laurence Gomme's Ethnology in Folklore (1892) others witchcraft, the way that Dracula does vampirism, by painting it as a pre-enlightened set of beliefs still held foreign (and 'backwards') cultures. A tantalizing concept for a work of fiction that seeks to frighten its readers, but an isolating approach to cultural studies. Gomme, didn't believe England was safe from witches, any more than Van Helsing thought they were safe from vampires.


The demonism of savagery is parallel to the witchcraft of civilisation in the power which votaries of the two cults profess, and are allowed by their believers to possess, over the elements, over wild beasts, and in changing their own human form into some animal form, and it will be well to give some examples of these powers from the folklore of the British Isles. - Laurence Gomme

Ethnology in Folklore is a terrible read, though it provides an interesting study in the history of race, and frequently sites Jacob Grimm (of the Brothers Grimm) for his work on teutonic mythology. Most notably, Gomme's witches have the power to turn into animals, though their power has been diminishing over the centuries, and by the 1890s they could only turn into small (mostly harmless) animals.

Gomme's writing, however, makes it easier to see why some might think Conan Doyle believed in witches, as it links them directly to fairy magic (with the help of Grimm, of course).

Although she was writing in the States, Matilda Joslyn Gage must be included among the writers, who wrote about witchcraft in the 1890s. In Women, Church and State (1893), she became one of the first writers to identify Christianity's impediments to women's equality. Gage demonstrated how religious doctrine is (even still) used to justify depriving women of civil, human, economic and political rights, even denying women the right to worship alongside men.

In Women, Church, and State, the historical persecution of witchcraft is identified as one of Christianity's tools for oppressing women for having any kind of knowledge, power, or autonomy. Gage also identifies ways in which her contemporaries recoiled from anything associated with witchcraft.


So firmly did the diabolical nature of the black cat impress itself upon the people, that its effects are felt in business to this day, the skin of black cats being less prized and of less value in the fur market than those of other colors. A curious exemplification of this inherited belief is found in Great Britain. An English taxidermist who exports thousands of mounted kittens each year to the United States and other countries, finds the prejudice against black cats still so great that he will not purchase kittens of this obnoxious color. In the minds of many people, black seems ineradicably connected with sorcery. - Matilda Joslyn Gage

Interestingly, the way that Gage understood witch lore in the 1890s, witches were supposed to be able to fly on animals or bits of wood, whereas in contemporary witch lore, we only image witches flying about on brooms. What is the significance of those brooms in relation to gender? Does it indicate that women are oppressed now in ways we weren't back then?

In 1899, Charles G Leland published a book about witchcraft, as a kind of gospel text, Aradia, or the Gospel of the Witches. In Aradia, Leland claims to convey the traditions of Italian witchcraft as conveyed him by his witch informant, Maddalena. The accuracy of the book is debatable, but it has been influential.

Because Wicca is a real religion today, I would trust the testimony of Wiccans as to whether Aradia is an accurate representation of the craft. The number of self-identified Wiccans in the USA has risen from 8,000 in 1990 to 342,000 in 2008 (interestingly, 75% of these are women). It shouldn't be as hard for us to find someone to ask as it was for Leland.

Leland provided a photograph of his witch informant, as a young fortune teller, making me feel that he wasn't protecting her identity very carefully, or else... he had someone else pose for the photo.

In the 1890s, as today, witchcraft is generally lumped in with superstition and the occult. While people wrote about witchcraft in the 1890s, witchcraft was still practiced, even in the distorted sense of women providing 'magic' or 'homeopathic' remedies. Oscar Wilde's mother had a woman living with her called 'Mrs Faithful,' who could make a powder that would 'cure' pregnancy.

In Women, Church, and State, Gage sites an American 1867 case of persecuting witchcraft, in which a woman used a few drops of cat's blood to help an ailing child. Compare that unproven remedy to what her contemporaries were buying from Victorian Druggists (cocaine, heroine, antimony, strychnine, etc.), and it becomes harder to argue that "witch" wasn't a word that was just being thrown around to hurt women for having any sort of knowledge, or independence (however weird, I mean... cat's blood? Really...).

If you have enjoyed the work that I do, please consider supporting my Victorian Dictionary Project!
Posted by Tine Hreno at 8:14 AM