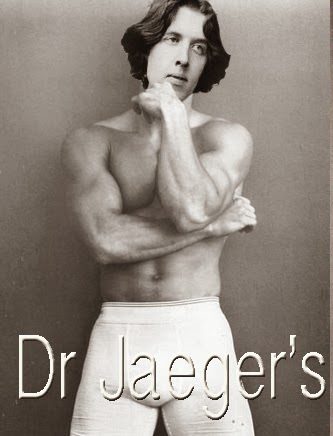 Fashion is a form of ugliness so intolerable that we have to alter it every six months. - Oscar Wilde

In an effort to shame me for my addiction to Cosmo, an old friend of mine used to love to throw this quote at me. He never really understood what it was that the Wildes hated about 'fashion.' It wasn't that they didn't want to look good. Both Oscar and Constance REALLY wanted to look good - they even called their meticulously decorated home 'House Beautiful.' Both Oscar and Constance edited women's magazines. Wilde even promoted a particular brand of underwear, but I'll get to that.

To the Wildes, and most of the cool people in their generation, fashion had victims. The most obvious were the workers that the industry exploited. By the 1880s, opponents of the fashion industry began including animals and birds as victims of the fashion industry because they were (are still) killed for their skin and feathers. The people, especially the women, who gave in to the seductive power of the mainstream fashion industry of the 1880s and 90s were also victims, according to the Rational Dress Society.

Constance was the mouthpiece of the Rational Dress Society, as editor of 'The Rational Dress Society Gazette.' Both she and Oscar were well-known for their support of Rational Dress, also called "Hygienic Dress," which made them persuasive spokespeople for alternative fashion designers. It was in this capacity that Oscar Wilde promoted Dr Jaeger's Hygienic Woolen Underwear, which in turn became the underwear of choice for intellectuals and aesthetes in the 1890s.

Dr Jaeger's became so popular that there were imitators, who claimed to be manufacturing underwear using the Dr Jaeger system, or would simply call their under Jaeger Underwear.

So, it wasn't that Oscar hated fashion. He mostly just hated the unethical practices of the fashion industry.

If you have enjoyed the work that I do, please support my Victorian Dictionary Project!
Posted by Tine Hreno at 8:34 AM