The Adventure of the Two Collaborators

Victorians loved a good parody, as is evidenced by the success of Punch, which ridiculed just about everything that became popular or successful. Sherlock Holmes was both popular and successful in the 1890s, but Sir Arthur Conan Doyle was growing weary of his character and even tried to kill him off. Consequently, it comes as no surprise that the best parody of Sherlock Holmes won Doyle's approval.

The story is called "The Adventure of the Two Collaborators" (1893) and what surprised me is that it was written by J.M. Barrie, the author of Peter Pan (1909)! The origin of the story is rooted in a history of collaboration between the two authors.

In 1892, Barrie suffered from a nervous breakdown, while working on his play, Jane Annie, and turned to his friend, Doyle for support. At this time, Doyle was a new father and he was considering killing off Sherlock Holmes, so that he might pursue a more serious form of writing. Writing for the theatre seemed like just the thing. 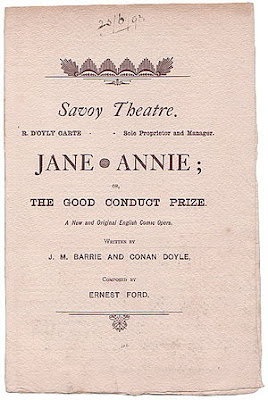 If you were wondering why you never heard of Barrie's play, Jane Annie, it wasn't much of a success and got pulled from the theatre in March 1893 after only fifty performances. Doyle tried working from Barrie's notes, but with an obvious lack of success.

Sometime soon after the play closed, Barrie presented Doyle with a copy of his collection of short stories, A Window in Thrums. Inside the book jacket, Barrie had written "The Adventure of the Two Collaborators" for Doyle. Doyle loved it, though it remained unpublished until 1924, but is presented here for your enjoyment!

The Adventure of the Two Collaborators

Sir James Matthew Barrie
Written on the flyleaf of a book
given to Sir Arthur Conan Doyle
commemorating their failed opera,
Jane Annie; Or The Good Conduct Prize
1893

In bringing to a close the adventures of my frined Sherlock Holmes, I am perforce reminded that he never, save on the occasion which, as you will now hear, brought his singular career to an end, consented to act in any mystery which was concerned with persons who made a livelihood by their pen. "I am not particular about the people I mix among for business purposes," he would say, "but at literary characters I draw the line."

We were in our rooms in Baker Street one evening. I was (I remember) by the centre table writing out "The Adventure of the Man Without a Cork Leg" (which had so puzzled the Royal Society and all the other scientific bodies of Europe), and Holmes was amusing himself with a little revolver practice. It was his custom of a summer evening to fire round my head, just shaving my face, until he had made a photograph of me on the opposite wall, and it is a slight proof of his skill that many of these portraits in pistol shots are considered admirable likenesses.

I happened to look out of the window, and perceiving two gentlemen advancing rapidly along Baker Street asked him who they were. He immediately lit his pipe, and, twisting himself on a chair into the figure 8, replied:

"They are two collaborators in comic opera, and their play has not been a triumph." 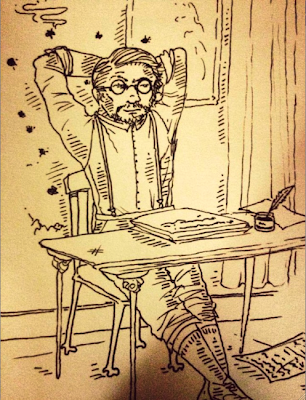 I sprang from my chair to the ceiling in amazement, and he then explained:

"My dear Watson, they are obviously men who follow some low calling. That much even you should be able to read in their faces. Those little pieces of blue paper which they fling angrily from them are Durrant's Press Notices. Of these they have obviously hundreds about their person (see how their pockets bulge). They would not dance on them if they were pleasant reading."

I again sprang to the ceiling (which is much dented), and shouted: "Amazing! But they may be mere authors."

"No," said Holmes, "for mere authors only get one press notice a week. Only criminals, dramatists and actors get them by the hundred."

"Then they may be actors."

"No, actors would come in a carriage."

"Can you tell me anything else about them?"

"A great deal. From the mud on the boots of the tall one I perceive that he comes from South Norwood. The other is as obviously a Scotch author."

"How can you tell that?

"He is carrying in his pocket a book called (I clearly see) 'Auld Licht Something.' Would any one but the author be likely to carry about a book with such a title?"

I had to confess that this was improbable.

It was now evident that the two men (if such they can be called) were seeking our lodgings. I have said (often) that my friend Holmes seldom gave way to emotion of any kind, buy he now turned livid with passion. Presently this gave place to a strange look of triumph.

"Watson," he said, "that big fellow has for years taken the credit for my most remarkable doings, but at last I have him - at last!"

Up I went to the ceiling, and when I returned the strangers were in the room.

"I perceive, gentlemen," said Mr. Sherlock Holmes, "that you are at present afflicted by an extraordinary novelty."

The handsomer of our visitors asked in amazement how he knew this, but the big one only scowled.

"You forget that you wear a ring on your fourth finger," replied Mr. Holmes calmly.

I was about to jump to the ceiling when the big brute interposed.

"That Tommy-rot is all very well for the public, Holmes," said he, "but you can drop it before me. And, Watson, if you go up to the ceiling again I shall make you stay there."

Here I observed a curious phenomenon. My friend Sherlock Holmes shrank. He became small before my eyes. I looked longingly at the ceiling, but dared not.

"Let us cut the first four pages," said the big man, "and proceed to business. I want to know why -"

"Allow me," said Mr. Holmes, with some of his old courage. "You want to know why the public does not go to your opera."

"Exactly," said the other ironically, "as you perceive by my shirt stud." He added more gravely, "And as you can only find out in one way I must insist on your witnessing an entire performance of the piece."

It was an anxious moment for me. I shuddered, for I knew that if Holmes went I should have to go with him. But my friend had a heart of gold. "Never," he cried fiercely, "I will do anything for you save that."

"Your contined existence depends on it," said the big man menacingly.

"I would rather melt into air," replied Holmes, proudly taking another chair, "But I can tell you why the public don't go to your piece without sitting the thing out myself."

"Because," replied Holmes calmly, "they prefer to stay away."

A dead silence followed that extraordinary remark. For a moment the two intruders gazed with awe upon the man who had unravelled their mystery so wonderfully. Then drawing their knives --

Holmes grew less and less, until nothing was left save a ring of smoke which slowly circled to the ceiling.

The last words of great men are often noteworthy. These were the last words of Sherlock Holmes: "Fool, fool! I have kept you in luxury for years. By my help you have ridden extensively in cabs, where no author was ever seen before. Henceforth you will ride in buses!"

The brute sunk into a chair aghast.

The other author did not turn a hair.

To A. Conan Doyle,
From his friend
J. M. Barrie


The last image was an illustration for the story, created by my daughter.