Today, I'm using a story about a vampire graveyard to talk about a book by Oscar Wilde's mother. The connections between the story and the Ancient Legends, Mystic Charms, and Superstitions of Ireland is tenuous at best, but I believe that Oscar Wilde's mother was a help to Bram Stoker when he was researching Dracula.

Here's the story: road workers in southern Poland recently found a total of seventeen oddly-buried skeletons. The heads were cut off and lay between the hands or knees of the deceased. The bodies date back to the fifteenth or sixteenth centuries, to when fear of vampires was common in the area. Lukasz Obtulowicz, a supervising archaeologist, recognized clear indications that this was a vampire burial site and he noted that stones were placed on the skulls “to prevent the vampires from returning to life.” (Read the full story here.)


"I shall cut off her head and fill her mouth with garlic, and I shall drive a stake through her body."- Van Helsing in Dracula

Clearly, this is the stuff of the legends that Bram Stoker built his vampire story, Dracula, upon, but Bram Stoker never traveled to eastern Europe. His brother, Dr. George Stoker did and may have told him some of these stories about vampires. Bram Stoker first learned about vampires, however, from his mother as a child. Stoker grew up near the Wilde family in Dublin. Oscar Wilde's mother, Lady Francesca Speranza Wilde concedes near the beginning of her book, Ancient Legends, Mystic Charms, and Superstitions of Ireland (1887), that: 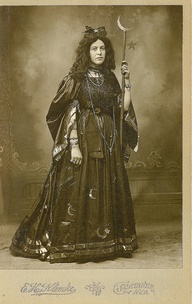 Greek, Slav,Teuton, Gypsy— many of their superstitions are dark and gloomy, especially those relating to vampires, wolves, andterrible demons, evil spirits, and fearful witches. The Irish legends rarely deal with anything terrible or revolting.


This story of Kern of Querin still lingers in the faithful, vivid Irish memory, and is often told by the peasants of Clare when they gather round the fire on the awful festival of Samhain or November Eve, when the dead walk, and the spirits of earth and air have power over mortals, whether for good or evil.

[...] for the souls of the dead have power over all things on that one night of the year; and they hold a festival with the fairies, and drink red wine from thefairy cups, and dance to fairy music till the moon goes down.

And a story that goes a small distance toward helping me understand why my daughter is terrified of moths!


At last the agony seemed to cease, and the stillness of death settled on his face. Then the child, who was watching, saw a beautiful living creature, with four snow white wings, mount from the dead man's body into the air and go fluttering round his head.

So he ran to bring the scholars ; and when they saw it they all knew it was the soul of their master, and they watched with wonder and awe until it passed from sight into the clouds.

And this was the first butterfly that was ever seen in Ireland; and now all men know that the butterflies are the souls of the dead waiting for the moment when they may enter Purgatory, and so pass through torture to purification and peace. 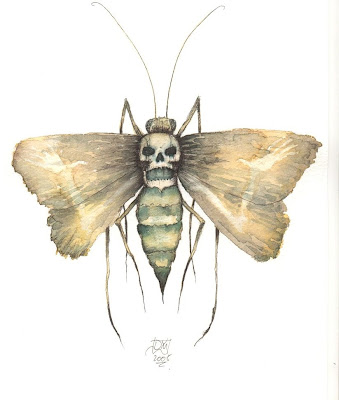 
Sometimes when the fishermen are out they meet a strange boat filled with people; and when they look onthem they know that they are the dead who have beencarried off by the fairies with their wiles and enchantmentsto dwell in the fairy palaces.

And to be certain, the first vampire that Dracula makes when he gets to Whitby looks more like one of Speranza's Irish fairies than she does a Nosferatu.

There's even part in Speranza's Ancient Legends that reminds me of the scene in Dracula, where Jonathon Harker faces the three brides of Dracula.


And when Hugh looked he saw a girl that had died the year before, then another and another of his friends that he knew had died long ago; and then he saw that all the dancers, men, women, and girls, were the dead in their long, white shrouds. And he tried to escape from them, but could not, for they coiled round him, and danced and laughed and seized his arms, and tried to draw him into the dance, and their laugh seemed to pierce through his brainand kill him. And he fell down before them there, like one faint from sleep, and knew no more till he found himself next morning lying within the old stone circle by the fairy rath on the hill. 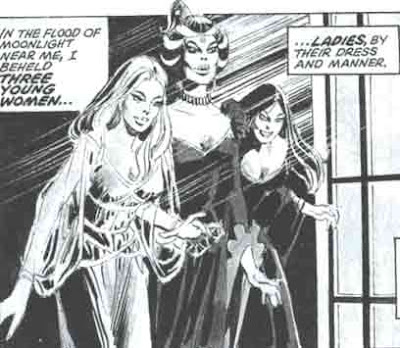 What really made me connect the Polish Vampire Graveyard with Speranza's Ancient Legend was superstition about burying the (un)dead. The full-text of Speranza's book is here and it's full of these kinds of superstitions, like if a suicide is buried in a normal cemetery all the other corpses will turn over on their faces.