I've already written a bit about what women were wearing, but haven't really touched on what men were wearing, except when I touched on a possible misrepresentation of what Oscar Wilde would wear. Some people say that women dress to impress each other, which probably explains why I'm far more interested in women's clothes, but I think the same must also apply to men. This was certainly true in the 1890s, when hedonism and Dandyism reached a height in the fin de siècle.

When I think of Victorian Dandies, I always think of Oscar Wilde, but Dandyism started with George Bryan "Beau" Brummell (1778-1840). Beau befriended the Prince Regent and became one of the most powerful men in England, not through birth, intelligence, or through military or academic achievements, but by simply being well dressed. 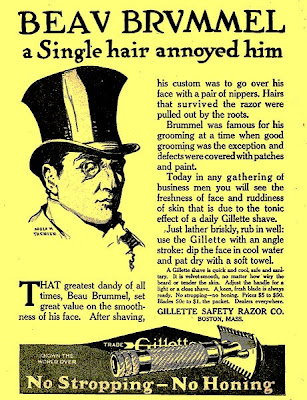 In this sense, Beau really paved the way for Oscar Wilde's future success, as Wilde became a celebrity before he became an accomplished writer.

In Beau's day, dressing well meant a top hat and tails, which is how he is invariably pictures. By the 1890s, lots of colours and styles were embraced by the fashionable gentleman. Kieran Jones explains that:


In the Victorian era, daily dress was much more formal than it is today. Unless they were a workman or a labourer, every gentleman was expected to wear a coat, vest and hat. To walk around in shirtsleeves without a vest or coat was like the modern day equivalent of walking around in your underwear. It was seen as very ungentlemanly and unseemly.

By the 1890s, Wilde and his friends wore fur coats and a variety of hats. Derbies and bowlers came into popularity by this time, though, of course, for a very fancy affair, who wouldn't wear a proper top hat? 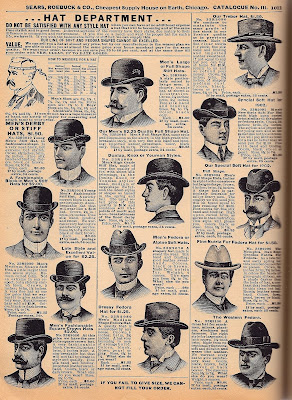 Because of Oscar Wilde's link with Dandyism, the contemporary imagination links the Dandy with homosexuality, just as modern Dandies or metrosexuals are linked to homosexual culture and seen as queer-positive. For the Victorian Dandy, at least before Oscar Wilde's trial, this was simply not the case. Before Oscar Wilde's trial, homosexuality as a cultural concept or a lifestyle simply did not exist. Of course, people engaged in homosexual acts, but a sexual act, homosexual or otherwise, did not change a person's social identity. Consequently, a Victorian Dandy was as likely to be repulsed (or aroused) as anybody else.

When I think of men's fashion (for the class of men who could be Dandies) in the 1890s, I see it going two ways. On the one hand, the Victorian era gave rise to the formal black suit that is still popular today. This was because Queen Victoria went into mourning for so long that the upper classes, who participated in her ritual of mourning wore black in solidarity when performing work or rituals related to the government. On the other hand, Victorian Dandies, like Oscar Wilde, embraced colour as a way of dressing up. 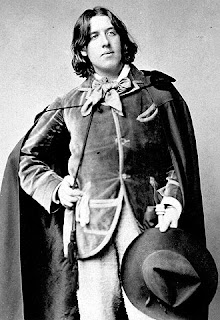 For these more colourful Dandies, as one blog on the subject of Oscar Wilde's clothes puts it:


Oscar Wilde wasn’t only a great writer, he was also a really cool fashion icon, not just for men, but also for women. He was an avid supporter of the Dress Reform Movement in the 19th century which broadened a woman’s closet with pants ( Say ‘thank you Oscar Wilde’, next time you wear those comfy boyfriend jeans). The dress Reform also worked the other way around for Oscar, clothes weren’t gender biased. Everyone should be able to wear anything they like. If you take a closer look at old portraits of Oscar Wilde, you’ll see that that is exactly what he did. Wearing a lot of velvet and silk in nice colors, he looked great, but kind of strange for his time.

In this sense, I think Oscar Wilde would have been very proud of his niece, Dolly, who was said to take very much after her uncle.

At $125, the limited first book is a little out of my price range (but the trade edition and ebook will follow soon). One of the many forgotten treasures this book contains is an earlier use of one of my favorite Wildisms. Oscar Wilde was known for testing and retesting his most wonderful expressions, the Philosophy of Dress is the first known occurrence of the Wildism in print:


Fashion is a form of ugliness so intolerable that we have to alter it every six months.