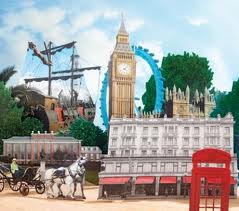 Though many writers in the 1890s were starving artists to be sure, some writers grew very wealthy. Oscar Wilde is certainly an example of that kind of success and the lifestyle that went with it, though, to some degree, that was by design when it came to the Savoy Hotel in London. 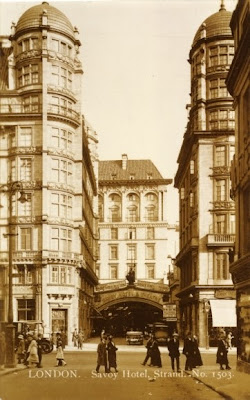 Not only is the Savoy Hotel a landmark in the history of writers in London in the 1890s, it is also an important place in the history of luxury hotels. In the hotel industry, "everything that’s happened in high-end hotels since the 1890s is arguably just a variation on a theme introduced by César Ritz, the Savoy’s original general manager, who counts electric lights and en-suite bathrooms among his hospitality innovations." I call that putting on the ritz!

Ritz's innovations attracted the rich and famous, which, despite the myth of the starving artist, included many members of the arts communities.

Claud Monet's Waterloo Bridge series was painted in room 618 in 1901.


This lithograph by James Whistler represents the view from his room at the Sovoy Hotel in 1896. 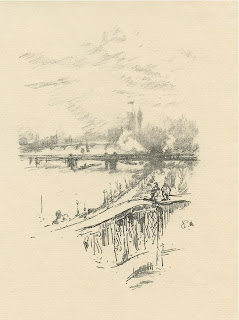 Sarah Bernhardt, H. G. Wells, George Bernard Shaw, and future Kind Edward V11 were also early guests, after the hotel opened in 1889. Though due the scandalous trial, Lord Alfred Douglas and Oscar Wilde are arguably the most well-known occupants of this period.

Ever the critic, Wilde wasn't as awe-struck or impressed with the hotel, in spite of how hard Ritz and his staff worked to accommodate its influential and often choosy guests. The Savoy Hotel kept records of guests’ particular preferences in order to provide them in advance. The staff made hospitality history as the first to photograph a guest's toiletries so they might arrange them accordingly in his washroom. The staff provided a fireproof eiderdown to another guest, who liked to smoke in bed. Wilde, however, scoffed at the very idea cold and hot indoor plumbing at the Savoy:


What is it good for? If I want hot water, I call for it.

The grounds of the Savoy Hotel have a long history of decadence, dating back to 1126 when Peter, Count of Savoy, built his palace there (also called Savoy). The Savoy Palace became the greatest house in England, during medieval times, known as a centre for art and culture. Geoffrey Chaucer began writing his Canterbury Tales, while in residence there. During its lifetime, the Savoy Palace housed the Dukes of Lancaster. The youngest son of King Edward III was living there, when it was destroyed in the peasants revolt of 1381. 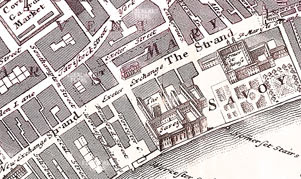 Wilde's connections to Gilbert and Sullivan were numerous and D'oyly Carte had organized his 1881 American Tour. They all wanted Wilde, the celebrity aesthete and socialite, as a patron at the Savoy and an all-purpose party guest. Sadly, we know so much about Wilde's days at the Savoy Hotel because they were recounted for his damning trials.

His homosexual affair with Lord Alfred ‘Bosie’ Douglas brought his flamboyant lifestyle at The Savoy to a bitter end. He had taken adjoining rooms on the third floor for himself and Lord Douglas. After a ‘wilde’ time, Douglas left the hotel and Wilde moved into a suite overlooking the river. He then wrote to Douglas: ‘Dearest of Boys, Your letter was delightful, red and yellow wine to me; but I am sad and out of sorts. I must see you soon. You are the divine thing I want, the thing of grace and beauty. My bill here is £49 for a week. I fear I must leave—no money, no credit, and a heart of lead.’

Bosie’s father took his son’s homosexual relations with Wilde as a personal affront and instituted legal proceedings. In one of the most sensational trials of the 19 century, Oscar Wilde was charged in 1895 with committing acts of ‘gross indecency’ with a string of young men. A handful of Savoy employees were among the key witnesses for the prosecution.

Wilde was found guilty and sentenced to two years’ hard labour. Thus, the hotel lost one of its most flamboyant guests. After his release from prison, Wilde left England and wandered around Europe for what were to be the last three years of his life. He died in 1900, at another hotel, the Hotel d’Alsace in Paris.

This - his last - hotel stay brought us his famous comment: “This wallpaper will be the death of me: one of us will have to go.” http://www.famoushotels.org/article/1189 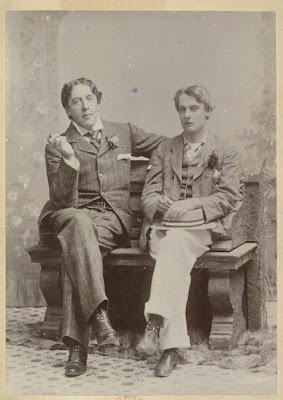