One of my favorite contemporary writers (William Gibson) once said that one of the biggest problems he faced when writing was how to move his characters around. I know what he means. I sometimes find that I have problems with scene changes. I find my characters so fascinating that I would gladly chronicle every moment of their lives for the duration of the story, but know that could be tedious for my readers. Then I sometimes have the problem, because my work is set in the 1890s, of how to move my writers from place to place, physically. I'm talking transportation. 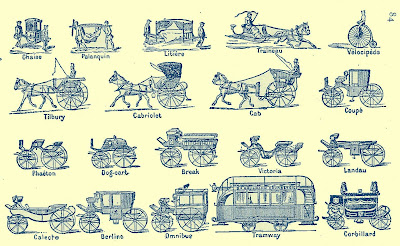 The most exciting thing that happened in transportation in London of the 1890s is, without a doubt, the Bersey Cab. Bersey Cabs hit the London streets in 1897. They were the first "horseless" taxis in the greatest city in the world. At their peak, inventor, Mr. Walter Bersey had over 75 of these "horseless" carriages on the road in London and they were probably the first experience most Londoners had of cars at the time. 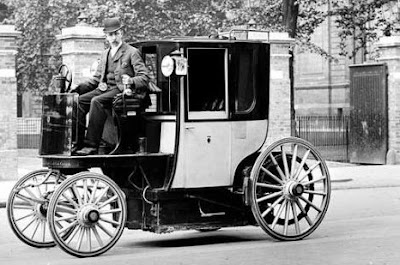 Bersey Cabs were electric cars. They could only travel thirty miles on a charge, but a clever system was devised to make changing the battery quick and easy. Sadly, unreliable tires and a failed attempt to generate his own electricity did Bersey in financially and he went out of business in 1899. 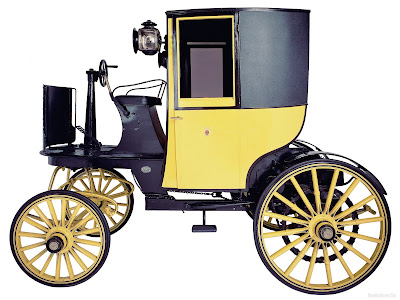 Honestly, as excited as I am by the electric taxis, the writers I've been talking about in this blog would have considered the vehicles a spectacle. Like many Londoners, they might have been embarrassed to be seen riding in them. If they got in them at all, it would have been as a lark.

My writers would have relied primarily on horse and steam power to get them around town. Sometimes, they would take a train, but, for shorter trips it was probably the hansoms of Sherlock Holmes stories that got authors from place to place. 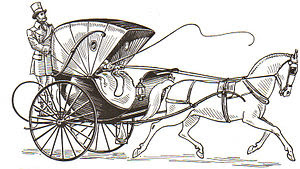 The most popular form of hansom was properly called a "cabriolet," which is where we get the word "cab" from. "Taxicab" is actually a word that is American in origin and was coined by Harry Nathaniel Allen of the New York Taxicab Company. He used the term as a contraction of "taximeter cabriolet," which referred to a vehicle for hire. The vehicle pictured above was so popular that it's proper name became a standard descriptor.

The taximeter part of that serves as a good reminder that these cabs cost money and anyone, who has read Dickens, should remember that most of London was poor. The trains were cheap enough to allow many people a way to commute, but this too was a drastic change from the way that things used to be.

Working as a clerk, in Dublin, Bram Stoker's father, Abraham Stoker walked three miles to work every day and it was probably uphill both ways. It stands to reason that many Londoners did the same thing, but in 1829 omnibus services began operating. Like modern bus services, these were colourful carriages covered in ads. 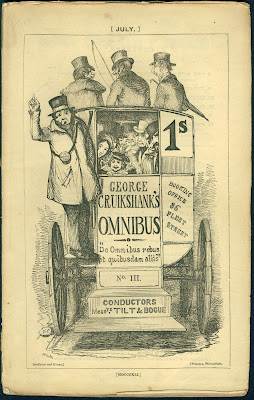 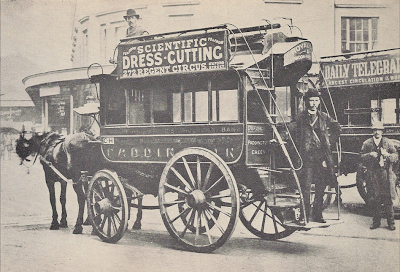 The omnibus was a very popular form of transportation for those who could not afford a private vehicle and they were still on the streets after thirty years of competition with horse-drawn trams on rails, also called horsecars. These ran earlier in the morning and were cheaper than the buses. 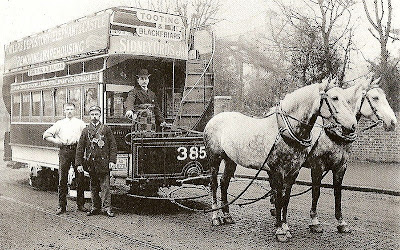 I understand how horsecars could beat the omnibuses by running earlier for less, but I don't understand the advantage of putting what looks like the same thing on rails. If any experts on the subject know and care to leave a comment, I would appreciate it.

I'd like to wrap up by saying something about bicycles, but, those were still used primarily for recreation. I found a list of what women shouldn't do on bicycles in New York. These are things like not fainting in the road, not boasting of your long rides, not asking people what they think of your bloomers, not going to church in your bicycle costume, and not cultivating "everything that is up to date because you ride a wheel." Women cyclists were called "centurions."

The suffragist, Susan B. Anthony said: 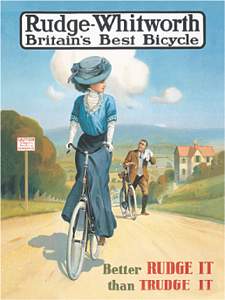 Bicycling has done more to emancipate women than anything else in the world. I stand and rejoice every time I see a woman ride on a wheel.It gives women a feeling of freedom and self-reliance.

According to Anthony, by 1896, women were buying 25-30% of all bicycles. The Rudge-Whitworth ad recommends the bicycle as a means of transportation, but I still think this was primarily a pastime for the middle class and wealthy.