A pictorial tour of Whitby in the 1890s. 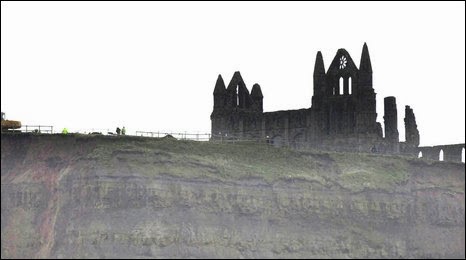 Right over the town is the ruin of Whitby Abbey, which was sacked by the Danes, and which is the scene of part of "Marmion," where the girl was built up in the wall. It is a most noble ruin, of immense size, and full of beautiful and romantic bits; there is a legend that a white lady is seen in one of the windows. - Dracula

Modern-day tourists to the town of Whitby frequently ask where they might find Dracula’s grave. There is no grave because there was no Dracula, but Whitby is one of the locations where Bram Stoker dreamed him up. Stoker was inspired by the town’s history, its red rooftops, and its ghostly Abbey.

Dracula is a source of tourism for Whitby today. Even the lawyer’s address, Number 7 The Crescent, has been turned into a bed and breakfast. Today, I’ve been hunting for images of what Whitby was like when Stoker stayed there in the 1890s. This is what I've found so far:

I found the above image on an interesting site that seeks to find "the authentic holiday lodgings of Mina and Lucy." I was also able to find another image of the spa that I found (above).

I seem to run out of space for pictures in this post and should really be writing my book. Be sure to check out my follow-up post for more of the pictures I found of Bram Stoker's Whitby.