While procrastinating on actually writing my book, I've been watching documentaries that trace the origins of forensic science to Sherlock Holmes and Dr. Joseph Bell. I also watched the Bill Nye/Ken Ham debate, which lead me to the conclusion that creationists must be opposed to forensic science. 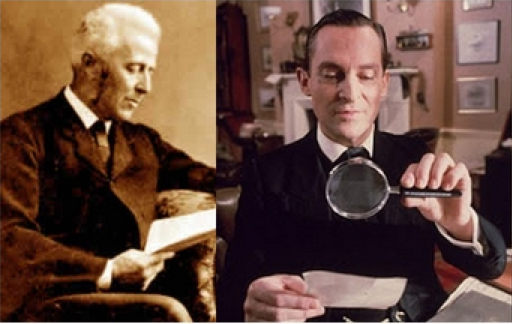 I have to come at this from two directions, so I will begin with the one most closely related to the subject of my blog.

The documentaries: Sherlock Holmes: the True Story demonstrates the ways in which Dr. Bell (the man who inspired Sherlock's character) was, in real life, the first forensic scientist - and actually used his skills to help police solve crimes! And Sherlock: the First CSI shows us that forensic scientists, since Dr. Bell, have been inspired by the books! If you know who Sherlock Holmes is or what forensic science is, you probably have some idea about how science can help us prove a person is guilty of a crime - even when they swear they are innocent! 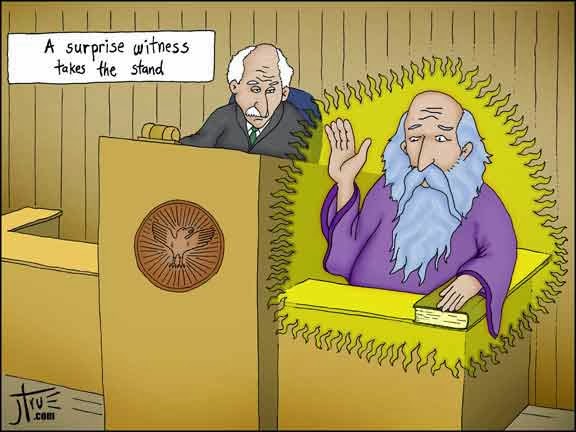 The term 'historical science' doesn't refer to a documented record of epic moments in science history, though that would be cool. It refers to science that attempts to make claims about the past, like geology and evolutionary biology. These are sciences that try to reconstruct the past. When talking about historical and observational science, Michael Weisberg puts it best:


The main difference is simply that historical sciences like geology and evolutionary biology try to reconstruct the past, while other sciences like chemistry aren't especially concerned with any particular time period.


Modern sciences that concern themselves with a particular time period are integral to our legal system and called forensics. The fictional Sherlock Holmes used chemistry to test blood stains, even when he had witnesses, who claimed to have seen what happened, but were actually guilty of committing the crime. By Ham's logic, the witness provides a more reliable testament to what transpired on a crime scene than the blood on the floor. The creationist case against historical science means they can't accept the results of a DNA test any more than they can the existence of fossils because it is historical science that investigates what happened within a particular time period. Creationists, therefore, must hate Sherlock! 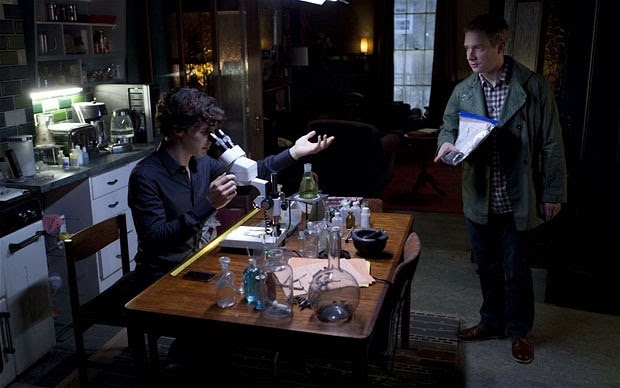 To Tania Lombrozo, who blogged Weisberg's excellent explanation above, the crux of the debate was about the basis of belief, "including the role of evidence versus revelation." Essentially, creationists are suffering from a very Victorian fear, one that Charles Darwin struggled with himself, that God might disappear in a puff of logic.

Here's where I wish that historical science was more about the history of science and less about trying to convince children that science is a bunch of hookum. Last month, I wrote a series of posts on the spirituality of writers in the 1890s. What was so striking about that period in science was how Victorians tried to use science to prove or disprove spiritual claims. Research has been done into the science of having a religious experience and that research has provided an array of explanations for an array of different religious experiences, but, at the time, I found the investigation in to psychics more entertaining (I kinda still do). 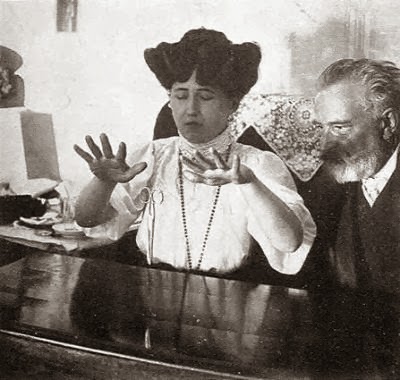 The Society for Physical Research was founded in London in 1882, "to approach these varied problems without prejudice or prepossession of any kind, and in the same spirit of exact and unimpassioned enquiry which has enabled science to solve so many problems, once not less obscure nor less hotly debated." W.B. Yeats and Arthur Conan Doyle were both members. The Society disproved one fraud after another.

The Society's track record in the 1890s alone should be enough to strike fear into the heart of anyone promoting spiritual beliefs as science, which might be why creationists recoil from conventional science and are building their own institutions. I'm sorry. I don't mean to suggest that creationist museums will be infiltrated by the Society any time soon. The Society does still exist, but I hadn't heard of them until I started investigating spiritualist frauds and the writers who loved them. Like most Christians of their era, they were searching for ways to reconcile their spiritual beliefs with science. 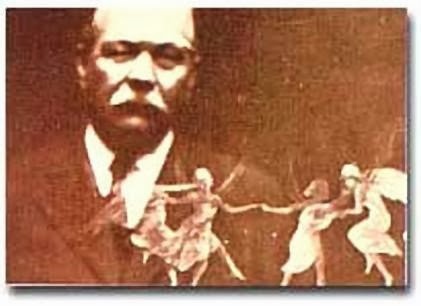 Really, I'm tired of people talking about science's threat to Christianity. Like Nye, I'm more concerned about the creationist threat to curiousity. Members of the Society believed in all kinds of things (Conan Doyle even believed in fairies), but scientists in the 1890s had curious enough minds to put their beliefs to the test, rather than hiding them so close to their heart that no one could touch them. But, I'm not being fair to creationists, when I glorify the attitudes of my favourite Victorians in the 1890s. 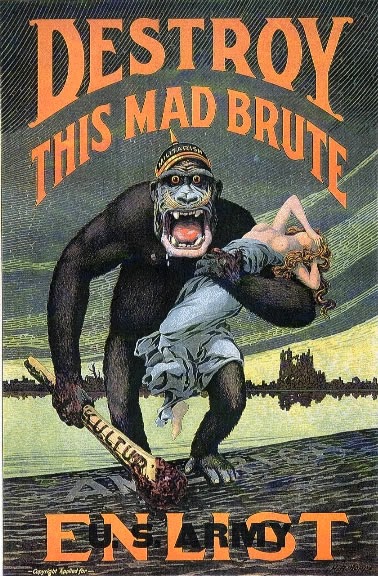 The Fundamentalist Movement was founded in the United States in 1878 and succeeded in getting the teaching of evolution banned from US public schools by the 1920s. Their campaign rode on the shoulders of the anti-German sentiment of the First World War: "The same science that manufactured poisonous gases to suffocate soldiers is preaching that man has a brute ancestry and eliminating the miraculous and the supernatural from the Bible."

Books, like Headquarters Nights (1917) and Science of Power (1918), strove to link Darwinism with Germany. To me these books should be part of the history of conspiracy culture. I like that Conan Doyle wanted Sherlock to take on the Germans too and published His Last Bow in the Strand in September 1917.

Written during the third year of WWI, His Last Bow is set in August 1914 and is crafted as a bit of war propaganda. In it, Sherlock is able to provide German intelligence to the English government before retiring from detective work to keep bees. Ironically, when Dr. Bell retired he also became an etymologist specializing in Bees, but that is another story. His Last Bow finishes with a bit of poetic patriotism. 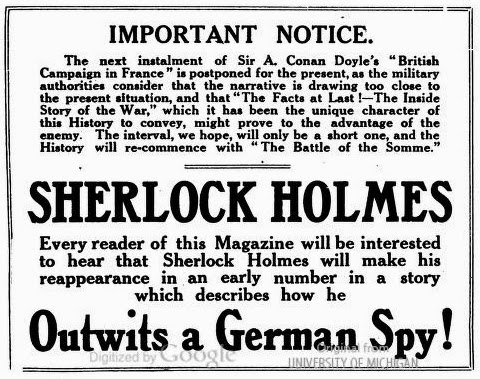 "Good old Watson! You are the one fixed point in a changing age. There's an east wind coming all the same, such a wind as never blew on England yet. It will be cold and bitter, Watson, and a good many of us may wither before its blast. But it's God's own wind none the less, and a cleaner, better, stronger land will lie in the sunshine when the storm has cleared."

That sentiment of growing stronger through adversity is what is missing from creationism. To me, a curious and intelligent mind is one that is not afraid to have its opinions and beliefs changed. Sherlock wouldn't have got very far if he began every case with a preconceived notion of who the killer was or just took the witness's word for what had happened. Stories written, like that, wouldn't have captured anyone's interest or inspired chemists to improve blood tests for toxic substances.

The appeal of Sherlock Holmes is that he's kind of like a superhero, but he doesn't have any magical powers, which means that we don't have to be from another planet of bitten by a toxic spider to get as powerful as he is! If we read enough, if we learn enough, if we are observant and conduct a lot of experiments, we might get as smart and powerful as Sherlock!

The danger of not nurturing curious minds is that we won't have as many new advances in forensic science or medicine. Heck, we might even be raising future law enforcement that thinks a witness's statement is more reliable than the smoking gun in her hand.

I'm going to go back to my writing now and will try not to watch so much TV.