Dracula wasn't as successful as Bram Stoker hoped it would be, when he first published it. I said that once and still believe it. I think he would be humbled by its success today. Yet, somewhere along the line, I got the impression that it was unpopular, when he first published it. Looking over some reviews from 1897, I really wonder where I ever got that idea or maybe I've become too much of a horror movie fangirl to properly read Victorian book reviews. 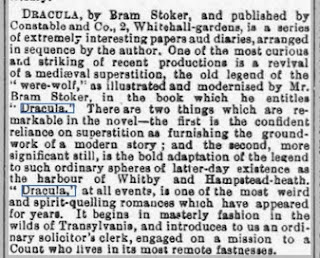 Of Dracula, Stoker wrote to William Ewart Gladstone that:


The book is necessarily full of horrors and terrors but I trust that these are calculated to “cleanse the mind by pity & terror.” At any rate there is nothing base in the book and though superstition is brought in with the weapons of superstition I hope it is not irreverent.

And maybe that is the key to what made Stoker feel it was unsuccessful, as the reviews that follow emphasize the terror of it all with little talk of any moral teachings.


It is said of Mrs. Radcliffe that when writing her now almost forgotten romances she shut  herself up in absolute seclusion, and fed upon raw beef, in order to give her work the desired atmosphere of gloom, tragedy and terror.  If one had no assurance to the contrary one might well supposed that a similar method and regimen had been adopted by Mr. Bram Stoker while writing his new novel “Dracula.” In seeking for a parallel to this weird, powerful, and horrorful story our mind reverts to such tales as “The Mysteries of Udolpho,” “Frankenstein,” “Wuthering Heights,” “The Fall of the House of Usher,” and “Marjery of Quether.” But “Dracula” is even more appalling in its gloomy fascination than any one of these (The Daily Mail, 1 June 1897).

My favorite thing about that review is that, unknown to the reviewer (I hope), Stoker really did like to get into character when he was writing horror stories! 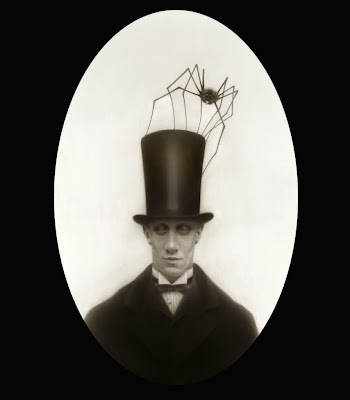 My affection for this next review is why I think I might not be reading them properly.


Mr. Bram Stoker should have labelled his book “For Strong Men Only,” or words to that effect. Left lying carelessly around, it might get into the hands of your maiden aunt who believes devoutly in the man under the bed, or of the new parlourmaid with unsuspected hysterical tendencies. “Dracula” to such would be manslaughter. It is for the man with a sound conscience and digestion, who can turn out the gas and go to bed without having to look over his shoulder more than half a dozen times as he goes upstairs, or more than mildly wishing that he had a crucifix and some garlic handy to keep the vampires from getting at him. That is to say, the story deals with the Vampire King, and it is horrid and creepy to the last degree. It is also excellent, and one of the best things in the supernatural line that we have been lucky enough to hit upon (Pall Mall Gazette, 1 June 1897).

"Horrid and creepy to the last degree" sounds like a compliment to me, after all Stoker admitted Dracula was "full of horrors and terrors." He couldn't have been shocked or disappointed by this review. Could he?

I love how the next one insights paranoia.


It is an eerie and gruesome tale which Mr. Stoker tells, but it is much the best book he has written. The reader is held with a spell similar to that of Wilkie Collins’s “Moonstone,” and indeed in many ways the form of narrative by diaries and letters and extracts from newspapers neatly fitted into each other recalls Wilkie Collins’s style…. Mr. Stoker keeps his devilry well in hand, if such an expression is allowable; as strange event follows strange event, the narrative might in less skilful hands become intolerably improbable; but “Dracula” to the end seems only too reasonably and sanely possible. Henceforth we shall wreathe ourselves in garlic when opportunity offers, and firmly decline all invitations to visit out-of-the-way clients in castles in the South-East of Europe. “Dracula” is a first rate book of adventure (Glasgow Herald, 10  June 1897).


If I had to do away with visiting all my invitations to go see "out-of-the-way clients in castles in the South-East of Europe," I just don't know how I'd pay the rent!

Ok. I guess some of Stoker's contemporaries really didn't like reading Dracula.


Man is no longer in dread of the monstrous and the unnatural, and although Mr. Stoker has tackled his gruesome subject with enthusiasm, the effect is more often grotesque than terrible…. The plot is too complicated for reproduction, but it says no little for the author’s power that in spite of its absurdities the reader can follow the story with interest to the end. It is, however, an artistic mistake to fill a whole volume with horrors. A touch of the mysterious, the terrible, or the supernatural is infinitely more effective and credible.  (Manchester Guardian, 15 June 1897)

"I was able to finish the book" isn't really a compliment. Another condemning review in the Athenaeum (26 June 1897) complains that:


At times Mr. Stoker almost succeeds in creating the sense of possibility in impossibility; at others he merely commands an array of crude statements of incredible actions.

And this is where I confess. Dracula isn't one of my favourite books. Stoker isn't one of my favourite authors. The more I learn about him, the less I think I would really like him as a person. I have read almost all of his works and found them decidedly misogynistic, which I refuse to provide the excuse of context that so many others will offer because not everyone shared his derogatory view of women. I actually agree with the reviewer from the Spectator (31 July 1897), who wrote: 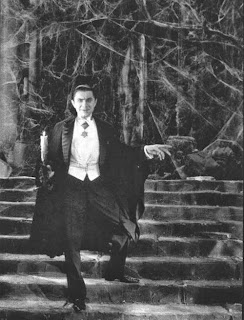 Its strength lies in the invention of incident, for the sentimental element is decidedly mawkish.

I don't think Stoker was a talented author, but he had a really good idea and really took his time in researching and writing it. I appreciate and respect Stoker for starting the Dracula franchise, for giving vampires charming outfits and accents, for making them shape-shifters and sexualizing them - even if a condemnation of women's sexuality was part of the original text.

Read these reviews and others in full in Elizabeth Miller, ed. Bram Stoker’s Dracula: A Documentary Volume, Detroit: Gale, 2004. 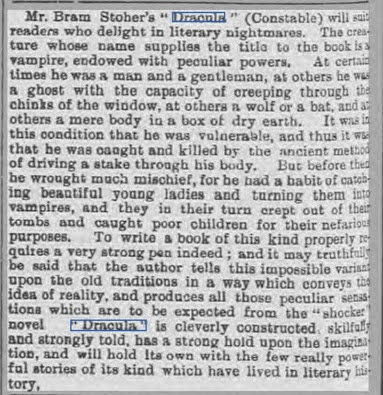