Weirdest Cameras of the 1890s

Off on another tangent tonight, this time it's spy cameras. One of my main characters is a journalist, so, obviously, I was captivated by the National Museum's blog post about Victorian concerns over privacy. Their blog post focuses on a wonderful concealed vest camera, a camera to be worn around the neck, while discretely taking photos.

In the early 1800s, cameras were introduced that allowed for light to be captured on photographic plates, producing an image. These early cameras took a long time to capture a photo, which meant that the subject had to stay still and the photographer needed to use a tripod (or something like a tripod) to keep the camera from moving. That's why you don't usually see people smiling in early-Victorian photographs. It doesn't matter how happy you are; if you hold a smile long enough, you start to look a little deranged. Sadly, sitting perfectly still and staring at a camera for five minutes had the same effect. 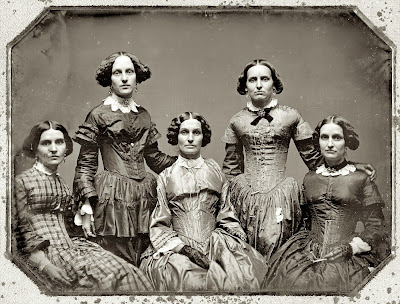 It also meant that dead people were excellent and popular models. 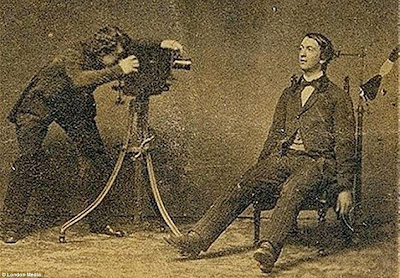 By the 1870s, new technology became available that allowed people to capture photos more quickly. Photos from this time on begin to appear more candid and, like our concealed vest camera above, cameras could be made smaller.

In the 1880s and 1890s, people started to take up photography as a hobby. In the 1890s, the word "Kodak" became synonymous with camera and "Kodaking" was a verb for practicing photography because Kodak introduced a camera that used a portable roll of film in 1890. Constance Wilde took one of these with her travelling in the early 1890s, but mostly used it to take picture of sights, rather than people (bummer). I find pictures of people so much more interesting than pictures of places because people change faster and are more interactive (most of the time).

Smaller and more fascinating cameras were being invented in the 1880s, like the concealable vest camera, but these were never as popular as the Kodak. Thinking of spy cameras, I've endeavoured to share a few of them with you here.

J. Lancaster & Son began producing this marvelous watch camera in 1886. More detailed images of it can be found here. 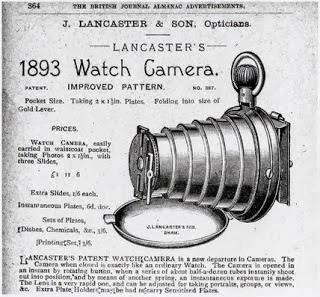 The year after that ad was printed, J. Lancaster & Son also featured a camera that was just small enough to fit in your pocket. 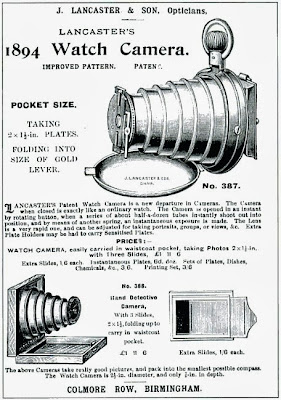 I have no documented evidence that this next one was ever a real product. I'd be a little horrified, but still amused if it was because I've read various claims that not only was it a camera and a cigarette lighter, disguised as a book, but it was also a gun! I suppose that was for all those times Victorians craved a cigarette, while taking a photo of someone they were about to kill? 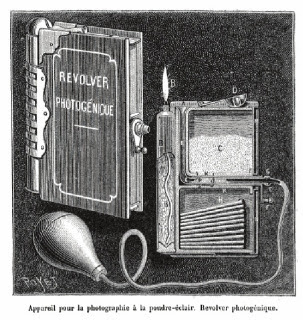 If it was a gun, don't you think it would be difficult to aim and shoot with a book that could also set you on fire?

And yet, this isn't the only device that links guns with photography in the 1890s. E.J. Marey, a French scientist and photographer, made a chronophotographic gun in 1882, not for shooting bullets at things, but for rapid-fire picture taking to aid in the study of movement. Marey was most interested in seeing how birds fly, but also studied humans, horses, dogs, sheep, donkeys, elephants, fish, insects, reptiles, and microscopic creatures. His longest-lasting impact on culture, was a study about how cats always land on their feet. He made the world's first cat video and we know what that did to the internet. 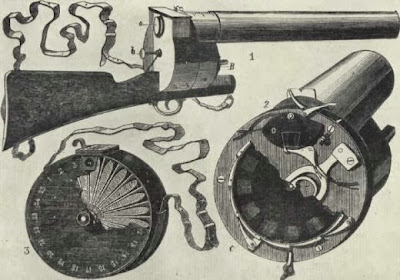 I love that as soon as people could start taking candid pictures, they started taking pictures of cats. We all know that a cat can sit perfectly still all day, until you try to take its picture!

Books were definitely a popular way to disguise a spy camera. In 1892, Scovill & Adams disguised a camera as a stack of three books, titled "French," "Latin," and "Shadows." This also included a classic leather strap (I don't understand how people ever used those to carry books). 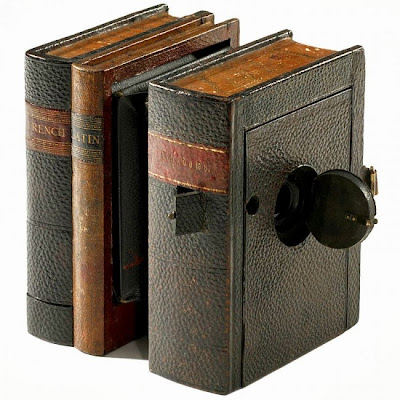 The name, "Demon Detective Camera," says so much about some of these small portable cameras. The British-made Demon was a cheap simple camera. The rear bears the manufacturer's name: "W. Phillips stamper Birmingham." The patent covering the camera belonged to W. O'Reilly. Some ads reported that 100,000 cameras had been made. They must have been kidding! I hope they were kidding? 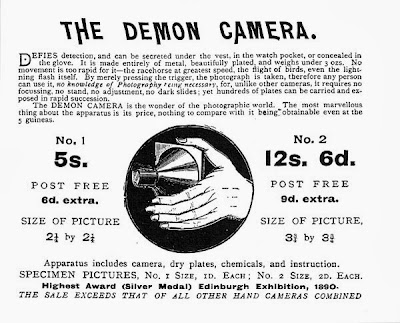 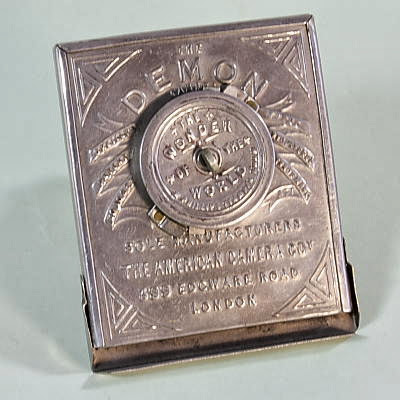 In 1885, the Marion & Company of London began producing the Marion's Parcel Detective Camera. As its name suggests, the camera was disguised as a parcel to conceal its actual purpose from the subjects of its photos. The most popular version was covered in brown paper and tied with string, like the typical parcels of the day. A more expensive version was also available covered in leather. As you can see in the ad, the gentleman holding it doesn't look suspicious at all! 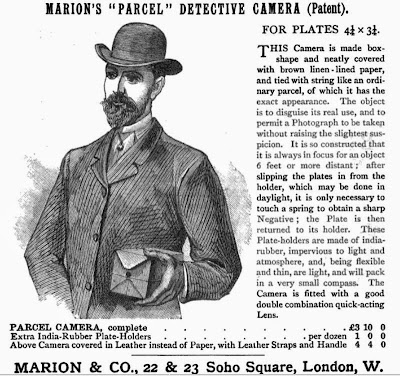 More detective cameras were manufactured in the 1900s, but are beyond the scope of this blog. As fun as these cameras are, I find them a little insidious. Readers of this blog will empathize with my affection for Oscar Wilde and Victorian scholars of homosexuality in the Victorian era will know that blackmail was a problem for anyone who didn't strictly adhere to cultural norms.

The Demon Camera Depicts the hypocrisy of life and the frivolities of fashion unknown to its victims. Can be used on the promenade, in law courts, churches, and railway carriages; also in breach of promise divorce casesl in fact at all awkward moments when least expected. The artful maiden, the wily detective, the wronged wife will now collect damning evidence. The bad boy will levy black mail upon his sisters by illustrating family squabbles instead of angelic sweetness, and human happiness will now be within reach of all.

And that's from the camera's own ad! 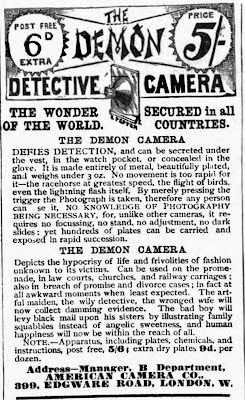