After finding a list of bizarre Victorian inventions, I couldn't get the first one out of my head. It was a smoking machine. The list's author claimed that Victorians loved the smell of smoke so much that they used this machine or proposed it for use in bars and clubs, where there weren't enough smokers already. 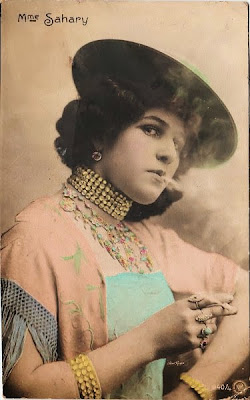 This put the image in my head of smokers waving around sticks of incense instead of cigarettes, while people nearby react as if they are engaged in some form of aromatherapy. If this sounds ridiculous, its because it is. The smoking machine pictured in the amusing list of bizarre Victorian inventions was called Parenty's Smoking Machine and I found evidence of its intended use for cigarette and cigar manufacturers. 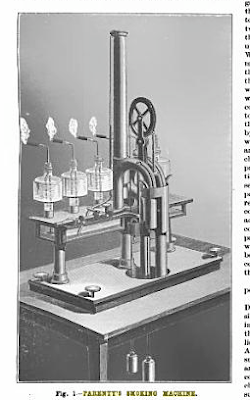 We produce herewith, from La Nature, an illustration of a novel apparatus, called by its inventor, Mr. Parenty, a "smoking machine." Tobacco manufacturers make their cigars out of quite a large number of different leaves, whose physical and chemical qualities have to be combined as to yield an articile that gives out an agreeable odor and burns well. Combustibility, then, is a physical quality that must be estimated for each variety of leaf. Such estimate is made by measuring the time during which a certain style of cigar, made solely from the tobacco to be tested, holds its fire without drawing on it a second time. In this comparative determination the intensity of the lighting is the element that has to be determined and regulated. To accomplish this is the object of the machine under consideration, which is so constructed as to imitate the motions of a smoker, who, at regular intervals, would inhale a definite volume of air with a definite and constant force of suction.

I am omitting the middle of the article because it focuses on the mechanics of Parenty's Smoking Machine, but if you are interested you can find it in issue 54 of Scientific American (23 January 1886).


This ingenious apparatus, which does its inventor great credit, was presented to the Administration of Tobaccos in 1884, and excited great interest at the Anvers Exhibition.

Producing a smoking machine for use by the manufacturers of tobacco products makes a lot more sense than using a machine that smokes individual cigarettes to fill a bar with smoke. Sadly, the inventor is only identified as "Mr. Parenty," but a more curious mind might check into the documentation from what was presented to the Administration of Tobaccos in 1884. I suspect, because this was published in 1886, the Mr. Parenty did quite well for himself with this invention.