By the 1890s, Sir Arthur Conan Doyle achieved considerable success, as the author of Sherlock Holmes, but was anxious to start writing something different. In 1892, he wrote a play, which was immediately snatched up by London's most famous actor, Henry Irving, and presented to his theatre manager, Bram Stoker. 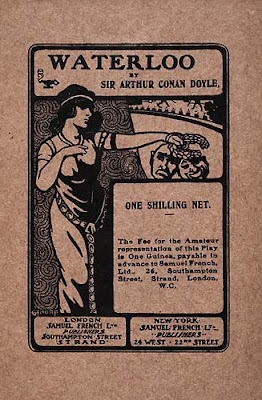 In his Personal Reminiscences of Henry Irving, Stoker recorded the event, as follows:

ONE day early in March 1892, whilst we were rehearsing Tennyson's play, The Foresters, which in accordance with the author's request was produced for copyright purposes at the Lyceum, Irving came into the office in a hurry. He was a little late. He, Loveday and myself always used the same office, as we found it in all ways convenient for our perpetual consultations. As he came hurrying out to the stage, after putting on the brown soft broad-brimmed felt hat for which he usually exchanged his "topper" during rehearsals, he stopped beside my table where I was writing, and laying a parcel on it said:

"I wish you would throw an eye over that during rehearsal. It came this morning. You can tell me what you think of it when I come off!"

I took up the packet and unrolled a number of type-written sheets a little longer than foolscap. I read it with profound interest and was touched to my very heart's core by its humour and pathos. It was very short, and before Irving came in again from the stage I had read it a second time. When he came in he said presently in an unconcerned way:

"By the way, did you read that play?" 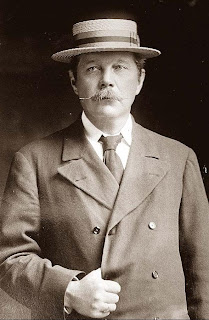 "I think this," I said, "that that play is never going to leave the Lyceum. You must own it at any price. It is made for you."

"You had better write to the author to-day and ask him what cheque we are to send. We had better buy the whole rights!'

"Who is the author?"

The author answered at once and the cheque was sent in due course. The play was then named A Straggler of '15. This Irving changed to A Story of Waterloo, when the play was down for production. Later this was simplified to Waterloo.

Irving fell in love with the character, and began to study it right away. The only change in the play he made was to get Sir Arthur then "Dr." or "Mr." Conan Doyle to consolidate the matter of the first few pages into a shorter space. The rest of the MS. remained exactly as written.

It was not, however, for nearly two years that he got an opportunity of playing it. It is a difficult matter to find a place for an hour-long play in a working bill. Henry VII., King Lear, and Becket held the Lyceum stage till the middle of 1893. Then came a tour in America lasting up to end of March 1 894. The short London season was taken up with a prearranged reproduction of Faust.

Then followed a provincial tour from September to Christmas. Here was found the opportunity. The Bells is a short play, and for mere length allows of an addition.

In the first week of the tour at the Princes Theatre, Bristol, on September 21, 1894, A Story of Waterloo was given. The matter was one of considerable importance in the dramatic world ; not only was Irving to play a new piece, but that piece was Conan Doyle's first attempt at the drama. The chief newspapers of London and some of the greater provincial cities wished to be represented on the occasion ; the American press also wished to send its critical contingent. Accordingly we arranged for a special train to bring the critical force. Hearing that so many of his London journalistic friends were coming an old friend of Irving' s then resident in Bristol, Mr. John Saunders, arranged to give a supper in the Liberal Club, to which they were all invited, together with many persons of local importance.

The play met with a success extraordinary even for Irving. The audience followed with rapt attention and manifest emotion, swaying with the varying sentiments of the scene. The brief aid to memory in my diary of that day runs:

"New play enormous success. H. I. fine and great. All laughed and wept. Marvellous study of senility. Eight calls at end." Unfortunately the author was not present to share the triumph, for it would have been a delightful memory for him. He was on a tour in America; "and thereby hangs a tale."

Amongst the audience who had come specially from London was  Mr. H. H. Kohlsaat, owner and editor of the Chicago Times Herald,  a close and valued friend of Irving and myself. He was booked  to leave for America the next day. When the play was over  and the curtain finally down, he hurried away just in time to  catch the train for Southampton, whence the American Line boat  started in the morning. He got on board all right. The follow-  ing Saturday he arrived in New York, just in time to catch the "flyer," as they call the fast train to Chicago on the New York  Central line. On Sunday night a public dinner was given to Conan  Doyle to which of course Kohlsaat had been bidden. He arrived  too late for the dining part ; but having dressed in the train he  came on to the hotel just as dinner was finished and before  the speeches began. He took a chair next to Doyle and said  to him:

"I am delighted to tell you that your play at Bristol was an  enormous success!"

"So I am told," said Doyle modestly. "The cables are excellent."

"They are not half enough!" answered Kohlsaat, who had been  reading in the train the papers for the last week.

"Indeed! I am rejoiced to hear it! " said Conan Doyle  somewhat dubiously.

"May I ask if you have had any special  report?"

"Oh, come!" said Conan Doyle, who thought that he was in  some way chaffing him."

"Not to me! But I am in all human probability the only man on the American continent who was there?"

Then whilst the  gratified author listened he gave him a full description of the play  and the scene which followed it. To my own mind Waterloo as an acting play is perfect ; and  Irving's playing in it was the high-water mark of histrionic art.  Nothing was wanting in the whole gamut of human feeling. It was a cameo, with all the delicacy of touch of a master-hand  working in the fine material of the layered shell. It seemed to  touch all hearts always. When the dying veteran sprang from his  chair to salute the colonel of his old regiment the whole house  simultaneously burst into a wild roar of applause. This was  often the effect at subsequent performances both at home and in America.

There's so much in this tale that I love, but mostly it's the global nature of the story. Even years later, as Stoker sits writing it, he can hardly believe the speed with which his friend got from the Lyceum Theatre in London to Doyle in Chicago - faster than the cables even! No wonder Victorians were interested in evolution and felt they were sitting on the edge of the future. No wonder we relate to them so well today. 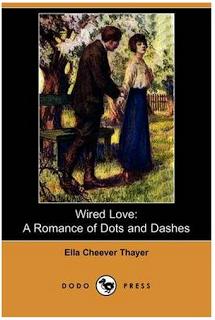 Wired Love: A Romance of Dots and Dashes tells a very contemporary story, which, after being forgetten for many years, is resurfacing as something very much like internet dating, and is near the top of my reading list. Stoker's Dracula was also considered a bit of technofiction, in which the protagonists used half a dozen new modes of recording their thoughts to tell the story of a vampire in London. I wonder what Stoker and Doyle would have thought of FaceTime and Skype.

I'm not, however, convinced that Stoker ever used most of the technology he was fascinated with. For many Victorians, new technology was frightening. Sigmund Freud and Queen Victoria were afraid of trains. The first time they showed a movie of a train in London, people fled the theatre afraid that the train was headed right for them!

Back to Stoker's story above, I love almost any story that can incorporate the word foolscap. It's a word I'm afraid will drop out of usage, during my lifetime. And I love that Stoker explains why he shared an office at the Lyceum, though my heart breaks for him a little bit.

He was the theatre manager and he was sitting there writing (maybe working on Dracula, when Irving barged in. Mrs. Stoker didn't like it when he wrote at home because he liked to act out his characters, so maybe the theatre was the right place for him to be writing, but he probably justified his sharing an office to his father too.

Abraham Stoker, Bram Stoker's father, was a petty Dublin cleric, who felt he had let his employers walk all over him throughout his career and wanted his sons to have more than him. Stoker doted on Irving and still had to share an office - poor guy.