The Sublime Society of Beefsteaks 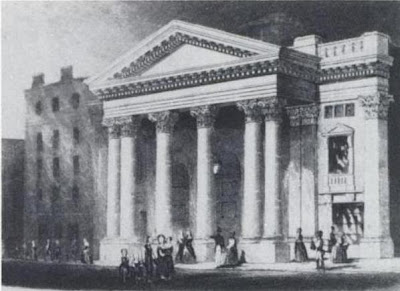 The Lyceum Theatre, in the 1890s, was best known for its stars: Ellen Terry and Henry Irving. Irving cultivated a reputation for himself as a serious professional. He purchased the theatre in 1878 and was the first actor ever knighted for his professional achievements in the performing arts. Irving's earnest reputation, however, was largely due to the earnest devotion of his manager, Bram Stoker, who, through Irving's success, also managed to maintain a place at the top of London Society. Although, Irving was wholeheartedly devoted to raising the status of the performing arts among his contemporaries, Stoker really did all of the earnest business work, leaving Terry free to slide down the bannister from her dressing room, when making an entrance, and Irving free to contemplate other things, like beefsteak! 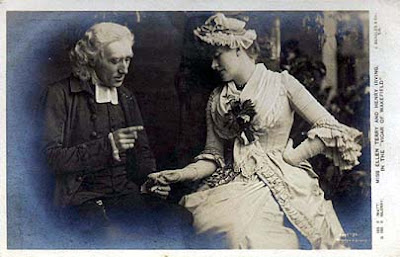 The Lyceum was the centre of Irving's highly successful career, but was also a place where he gathered people to eat a lot of beef (and drink a lot of wine). The present-day Beefsteak Club is (intentionally?) located on Irving Street in London. In the 1890s, Irving had his Beefsteak Room behind the stage of the Lyceum theatre. He decorated it in the most elaborate gothic fashion and used it to hold star-studded events. Stoker organized most of these events, but Irving and Terry presided over them, "as if they were hosting a royal court." 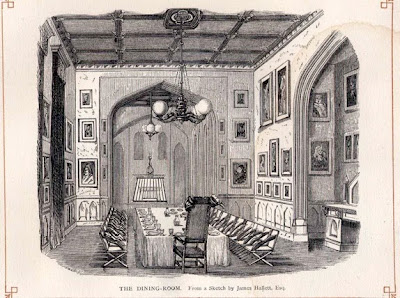 With help from his friends, 18th-century actor, Richard Estcourt, established the first Beefsteak Club in 1705, but this club lasted less than ten years. Twenty years later, another actor, John Rich, established the Sublime Society of Beefsteaks. The Society was a big success within the performing arts community and was joined by Samuel Johnson in 1780. The Prince of Wales even joined in 1785. Members wore a blue coat and buff waistcoat with brass buttons, with a gridiron motif that read "Beef and liberty." And yes, together they sat around eating steak and potatoes. The Sublime Society of Beefsteaks met regularly until 1867. 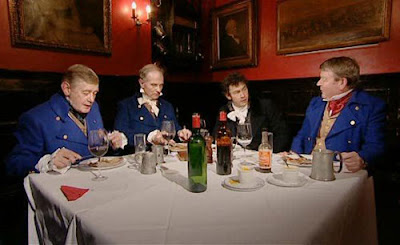 The Sublime Society of Beefsteaks was revived as the Beefsteak Club in 1876. Initially, organizers wanted to rent the room at the Lyceum, but didn't get the chance, until Irving bought the Lyceum two years later. Beefsteakers were and are an odd bunch. Two features of the club were, and are, that all members and guests sit together at a single long table, and that by tradition the club steward and the waiters are all addressed as "Charles."

Curiously, the beefsteak was (and maybe still is) seen as a symbol of patriotic Whig concepts of liberty and prosperity. The beefsteak fit with Irving's vision for the Lyceum, where he hoped to establish a place of cultural importance that would firmly legitimize theatre as an art form. I suspect he was more fond of the famous historic figures, who once belonged to the Sublime Society of Beefsteaks, than he was of Whig concepts of anything, especially because he and Stoker established a strong relationship between the theatre and Tory Prime Minister William Ewart Gladstone. 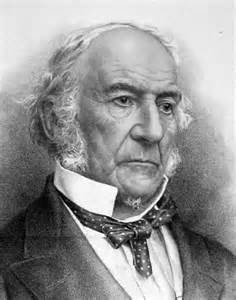 Though I'm not sure if Gladstone ever dined there, Irving liked to host intellectual celebrities, like Franz Lizst, as well as travelling celebrities and other actors, which is where and how the Actor's Benevolent Fund was formed.

In most accounts, Irving's Beefsteak Room is described in the most respectable of Victorian terms, but Irving had the occasional wild rumpus in this well-appointed room behind the stage in his theatre. Oscar Wilde's brother partook of some shenanigans there. And, sometimes, the police even had to break up a few ruckuses at the door. If not through having a good time with Beefeaters, I think Irving achieved his goals (with Stoker's help) through the Lyceum theatre.

As I already mentioned, Irving was knighted in 1895, the first ever accorded an actor. He was also the recipient of honorary degrees from the universities of Dublin (LL.D 1892), Cambridge (Litt.D 1898), and Glasgow (LL.D 1899). He also received the Komthur Cross, 2nd class, of the Saxe-Ernestine House Order of Saxe-Coburg-Gotha and Saxe-Meiningen.